Early British visitors to Central Asia were often made to wait for weeks at a time before receiving permission to cross over the frontier of some Khanate or other.  Meanwhile the encumbent despot would be holed up in his fortress several days march away, pondering his options and the importance of this earnest, round-eyed individual bearing gifts and letters from a distant king.  A mere minion clearly, a vassal only; was the absence of this king in person a slur that could be ignored?  But what if this King of England was as powerful as was rumoured?  How many canon did he have?  More than five?  Perhaps this man should be honoured and a useful ally gained?  Or perhaps he should have his eyes gouged out and be thrown into the pit.  This might appease the Russians whose army was quite close now and rather large.  And the neighbouring Emir – God grant him death – how cosy was he with those Russians?  Perhaps if I procrastinate a few more months this man in his tent will just freeze to death.  And so on and so on.

It must have been somewhat frustrating and not entirely dissimilar to entering the cavernous consular hall of the Chinese Emabassy in Bishkek.  Three windows of power to decide the fortunes of only fifty or so people, but no discernable movement after an hour and no physical barriers to discourage fresh-faced newcomers from mingling freely with the already despondent.  It is all over the internet forums that you must memorise who is in front and who is behind and stand your ground.  And there is mention also of the subsequent round-robin through the frozen streets of Bishkek.  We are nobodies but letters of introduction are still required and I can promise you there is none of that edge, that thrill of excitement that my early 19th century predecessors must have felt and even relished, as they waited, pistols cocked, for either that crucial stamp of approval or the unthinkable alternative. 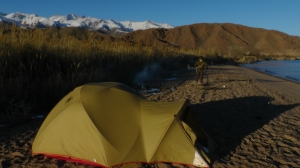 Awaiting the Consul´s ruling we have been holed up in the Issyk-Kul region of Kyrgyzstan, skiing and generally exploring.  Issyk-Kul is the world´s second largest mountain lake, after Titicaca in Peru.  It´s big, taking about 5-6hrs to drive around, extremely blue and has very big 3000-5000m mountains almost all the way around it.  The name means hot lake, which is misleading for it´s definitely not, but there is something going on because it doesn´t freeze.  A beach we camped on for a few nights froze solid almost as soon as the sun was off it and rocks and sticks splashed by waves at its edge were lumps of shining ice in the morning, but the water that stayed in the lake remained unfrozen.  It hasn´t been the perfect camping temperature. 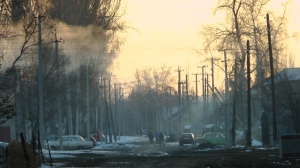 Now, after another round of visa games in Bishkek we on the other side of another set of mountains.  A woman who sold me a pie in Bishkek told us we must see the ´relic nut forest´  of Arkit so we are on our way.  We hitched a 6hr lift yesterday with a man whose car was stuffed with smoked fish in crates.  I remarked to Ayelen that the smell reminded me of an Arbroath Smokey and then discovered that´s exactly what they were, albeit from Norway.  Caressed by the wonderful smell of the smokeys we drove for hundreds of miles through the most amazing mountain-scape.  93% of Kyrgyzstan is mountainous and they are everywhere you look, stretching off to the left and right, towering walls of snow and rock rising abruptly from the valley floors with barely a foothill by way of warning.  In the winter many roads simply do not exist.  To drive to their capital the inhabitants of Talas, one of the largest towns in the country, currently have to go through Kazakhstan.  Ayelen has to have a letter of introduction to enter Kazakhstan so Talas is right out.  Arkit needs no letter but I´m not sure there´s a road to it at the moment.  We are probably not the only tourists in Kyrgyzstan right now but we´ve only met one other in the last ten days, a Japanese man, and I am very certain that nobody else is trying to get to Arkit at this time of year. Everybody thinks we are loonies. 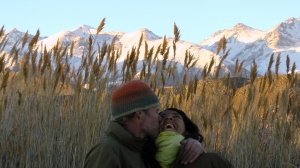 So we camp in somebodys field and are thankful it´s a bit warmer in this valley than we´ve previously experienced.  Then it rains, all night.  And now, after another day of hitch-hiking and bus we´ve made it and are in Arkit, staying with Osian, the driver who brought us the final leg.   Arkit is a sea of mud and soggy snow, thronged by cattle and wild looking youths charging one another on shaggy horses.  All around are mountains and further down the valley its like driving through Yosemite National Park in the States.  Massive, bulbous rock formations buttress the mountains above and beneath it all a meandering river with glacial green water cuts through. The usual tatty yet quaint mud and wood houses dot the valley floor amidst towering poplars and it´s not hard to imagine a spectacularly beautiful scene in the summer when all these brown slopes are grass and flowers.  There are beehives everywhere.

It´s a huge contrast up here to the first twenty or so miles this morning when the road ducked and dived around a moonscape of rolling grassy hills and mounds of slag.  The two were rendered so close in colour by the dirty snow all around that it was hard to tell them apart and harder to envisage the machinery capable of such destruction.  Then we passed one, a behemoth digger, a building on tracks, stripped and rusting, it´s scoop the size of a small truck.  Coal lies very close to the surface here and is excavated by such machines and on a smaller scale by desperate men who tunnel for it.  Wherever the road builders had cut into a hillside these miners had exploited the earthmoving already done and had left regularly spaced, door-sized entranceways into the grimy dark.

In our first stop, the village of Ok Jol, there was a women in full purdah, her face completely veiled.  There´s been little sign of Islamic sharia in our wanderings so far, rarely even a headscarf in view, but a few people in Bishkek have remarked disconsolately that it is only a matter of time.  Money is pouring in from Saudi Arabia apparently, every village sports a shiny new mosque and the whispy goatee is on the march.

The ´relic nut forest´ we were sent to discover is one of walnuts and the gnarled old trees are everywhere.  Sitting cross-legged around the evening meal in Osian and his wife, Jamila´s overheated kitchen we ate some for dessert while he had his two sons, 3 and 6 years old, demonstrate their fighting prowess.  Snow was falling heavily outside and we were glad not to be in our tent.  We should pay him whatever we felt in our hearts, Osian had pronounced upon showing us our room.  And during supper, when the lively, if manual, conversation arrived inevitably at our relative earnings we lowered ours to avoid any unrealistic expectations on his part.  Since revealing that we had no children and throwing in the usual ´Insh´allah´ (God willing) in place of the an explanation we had not the language to convey, I had sensed a look of pity in Osian´s eyes whenever he looked my way.  Now I sensed scorn.  Not only was I possibly impotent but I also earned less than he and, to cap it all, I sent my wife out to make a living as well!  Perhaps this pity for Ayelen, saddled with her non-man, went on to develop new ideas in his head, for later, as he proudly took us on a tour of his brand new house, soon to be a guest house, he furtively attempted to grope my wife´s breast.  She slapped the offending hand away and the hitherto jolly atmosphere was immediately adjusted.  Also adjusted was the figure we had had in our hearts to give him.

Our proposed campsite for the next evening, a beautiful grassy valley between bizarre sandstone spires over 20m tall that we´d spotted on the way up the valley was a washout in the morning.  Shortly another minibus taxi came along.  ¨Where are you going?¨  ¨Jalalabad.¨  ¨Whatever.¨ And in we climbed.